These are the voyages of the nutty toy collector. Many think Star Trek to be the beginning but in fact, Gene Roddenberry was preceded 100 years by a gentleman named Jules Verne. In his novel from Earth to the Moon first published in 1865, Mr. Verne predicted the launch site, the size of the vessel and the time required to travel from the earth to the moon with uncanny accuracy. Toy history would wait another 63 years for the creation of a comic strip character named Buck Rogers. After appearing with the funnies for four years the Daisey Company saw potential in yet another toy gun; the ray gun to be exact. That opened the floodgates and space toys just kept flowing out. 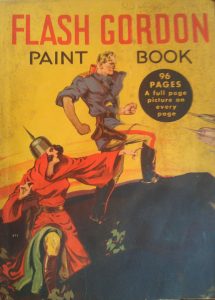 Space toys have always had the ability to capture a child’s imagination. The absolute thrill of it – rocket ships, aliens, robots, the list seems endless. I acquired my first space toy right here in Orangeville and still have it in my collection. It was a 1930s Paint Book Toy owned by the late Mr. Doug Stoddart. Doug was a well-respected realtor for many years in Orangeville and when I first started my practice in 1984, one of my very first deals was with Doug. I ended up negotiating the deal in the front parlour of Doug’s wonderful Victorian home located at 12 Faulkner St. I was so taken by the style and architecture of Doug’s home that I jokingly suggested that when it came time to sell I would like to have the first right of refusal. Doug very graciously said he would keep it under consideration. Eight months later I got the call – the time had come; would I like to make an offer?

While I was touring the home for the first time and poking around in the basement, I spied a box of old toys. Doug said they were his as a child and didn’t know why he still had them hanging around. On top of the box was the Flash Gordon Paint Book! On the offer, Doug was more than a little surprised to see among my list of inclusions, the toy box in the basement. The deal was struck and I was the proud owner of 12 Faulkner and Flash Gordon!

Then began the thrill of the search; I needed more space toys! Illustrated here is a wonderful piece from 1952 called the Spaceport. It was based on the first space TV series called Captain Video. It ran from 1949 to 1956 and was hugely popular with both children and adults. It was like a Western taking place in space. That play set offered hours of fun and adventure; you had spacemen and aliens, rocket canons and space guns, and a working flying saucer launchpad and even radar! Wow! I could go on forever!

Come visit the Past Glories of Toad Hollow to see our extensive offering!