The Teddy Bear “I don’t care if it rains or it pours ‘cause I got a lot of honey on my great big paws.” 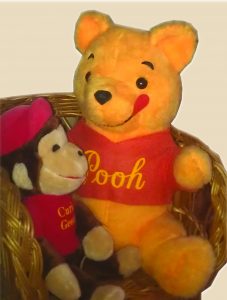 Enter the “Teddy Bear” based on a cartoon from 1902 in which the then President, Theodore Roosevelt was shown sparing a bear’s life while on a hunting expedition. This legend turned the bear into a cute bear cub and Teddy was born. Many famous bears followed, Pooh, Yogi and BoBo to name just a few.

A clever shopkeeper named Morris Mickton saw an opening and created America’s first Teddy in 1903. Around the same time, Margaret Steiff in Germany had the same idea. While styles changed, the classic humpback teddies from the turn of the century remain in the highest demand and are still copied. I found my wife, Roxie’s first bear, sometime in the mid-1980s at an auction in Orangeville. His one arm lay detached by his side and he was missing an eye. But a trip to the Bear Doctor soon had him as good as new.

Since then, we have adopted a whole family of bears, dogs, horses and even a bunny rabbit. The secret to proper care of a bear… Just smother it with love!

Come visit the Past Glories of Toad Hollow to find your treasure!