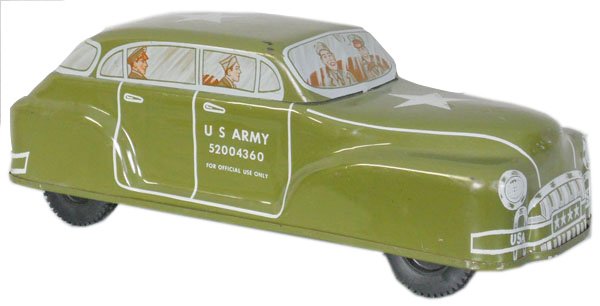 Pictured here is a 1930’s version of the Wolverines Drum Major Number 27. I thought this a fitting subject for Remembrance Day. This particular toy is from my own collection. It was purchased from a good friend of mine, from the Canadian Toy Collectors Society. It has graced my shelf for the last eight years and is a very fine example of the meticulous detail and lithography that made Wolverine toys so remarkable. Made of tin, this wind-up action toy, stands 13.5” high and stands on a base of 4.5” by 6.5”. When wound, the Drum Major beats the drum head with sticks in hand, and plays a staccato drumming rhythm.

Wolverine Supply and Manufacturing Company was established in Pittsburgh, Pennsylvania, and operated under this name from 1903 -1970. Wolverine’s first toys were designed to move with the help of sand or marbles, later wind-up models were designed.

In 1918 they started expanding their toy line and by the end of 1920 were known as a major toy manufacturer.
In 1926, Wolverine introduced their “Sandy Andy” and “Sunny Suzy” line of all-metal pull toys. These toys included a positive mechanical action, rubber tires, and were made of a “strong, durable metal” with lithographed decorations.

In the late 1950’s Wolverine became a subsidiary of Span Industries and in the 1970’s, their name was changed to Today’s Kids.

Come visit the Past Glories of Toad Hollow to find your treasure!