The Board Games of By-Gone Days 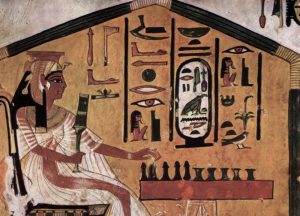 For this post, I will be focusing on vintage board games. One might think of board games as being quite recent, such as Monopoly or Snakes and Ladders, but history tells us that a board game called Senet was played in Egypt in 3500 BC.

This was a game of tiles and a set of throw sticks (similar to dice), where two players raced to complete a course on a track. Archeologists have found examples of this game, from very elaborate tiles, discovered in tombs, to simple baked clay tiles, which indicates this game was played among all social classes. Some believe this was a precursor to the game of backgammon. It seems almost all countries throughout history have had their favourites.

In the United States, with the invention of chromolithography in the 1840s, inexpensive board games found their way into most living rooms.

The earlier games were based on farm life or Christian virtue and good deeds. By the end of the 19th-century things turned toward capitalism with the “rags to riches” scenarios. Companies like McLaughlin Brothers and Parker Brothers have given us some of the finest examples. Monopoly hit the streets in 1930 and is one of the best known to date. 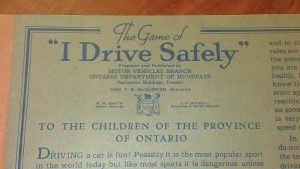 I have featured two games from my collection. The game of I Drive Safely was produced in the mid to late 1930s. This is a Canadian game produced by the Province of Ontario and was used to promote driver education to young people. You could mail in a request and it would be mailed back to you. I have included photos of the original mailing envelope, along with the unopened package of spinner and playing pieces. I believe it was free. I find that the colours and the artwork are just wonderful.

The next one, also Canadian, was a Second World War period game called Carrying the Tools to Britain.

It was produced in 1942 by CBS Radio Canada and was a war effort designed to help raise funds. It explained in incredible detail, the cost of fighting a war from the financial standpoint, however, unfortunately, not from the viewpoint of the cost of human life.

Of course, that sacrifice in life would not have been known until after the war had ended. This board game was similarly a mail-in item.

In the case of board games, this is also one of those areas where the preservation of the boxes is extremely important. A wall done, in only boxes or just game boards, is for me a visual feast.
The price of these games generally ranges between $50.00 and $100.00 each, depending on their condition.

For some good old-fashioned fun, bring out an old game, crack open a bottle of wine* and have some healthy competition with your favourite friends. Cheers!

*Note – Do not spill wine on the game!