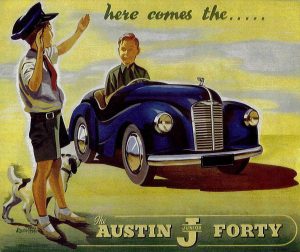 Thanks to shows like American Restoration, Canadian and American Pickers, and Pawn Stars, the classic toy pedal car has become an icon to toy collectors.

Pedal car history dates back to the 1890s when most were closely modeled from real cars. From the time pedal cars were created, it was something all youngsters dreamt of having, but sadly, their high cost of production meant they were playthings for only the wealthy.

Pedal cars reached their peak of popularity in the late 1920s and early 1930s and enjoyed a resurgence in popularity in the 1950s and 1960s when chain-driven models became available. Pedal cars were very popular with children since they incorporated the most current trends in the automotive world, such as lights and horns, wipers, ragtops, chrome detailing, hood ornaments, and white wall tires.

What I have pictured here, is an Austin J40 Roadster Pedal Car which was produced in South Wales; 32,098 J40s were manufactured between 1950 and 1971. The vehicles were built by disabled Welsh miners, who under the supervision of a doctor, found new meaning in life and had the satisfaction of a job well done.
The youngster sitting in the driver’s seat, and wearing a hoodie is my son, Brendan, circa 1990. It is hard to believe it, but Bren turns 29 this year!
The history of “Penny”, the name given to the car by Bren, has its roots in Toronto in 1978. At the time, I owned an antique store on Queen Street. A gentleman came in and said he had an interest in three of my pieces and asked if I was a trading man. I indicated that I most certainly was! Long story short, he had found the car on a loading dock at Sally Ann and had brought it home. I traded and sold it only three days later.

Flash forward to Orangeville, 1989 and my son is just four years old. I was in Toronto on business, and on a whim, I decided to drop in to see the buyer of the J40, bought it back, and took it home!
Brendan’s favourite thing with Penny was to jack her up on the front lawn, put on some Beach Boy Tunes, and pretend to work on her when all the high school girls walked by the house. On Halloween, he dressed up as a chauffeur and drove Penny door to door for treats.

Penny’s adventures are for now a thing of the past, but she graces the man cave and remains one of my family’s most treasured possessions.