With the majority of my toy playing years taking place in the 1950s, I am surprised at how few battery-operated toys I had, and yet, their history is quite interesting. Immediately following World War II, Japan found itself in deep economical trouble. The majority of factories had been destroyed during the war, and they had depleted their resources with their war effort.

Prior to the war, Japan’s toy industry flourished with cheap imitations of German and American toys. After the war, they then turned to recycled tin and perfected a tiny cheap motor that ran on D batteries. The rest of the story was pure genius. This motor combined with inexpensive tin gears made magic. 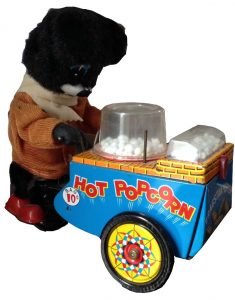 These factories created miniature automatons; an art form that sold for 79 cents. Almost any physical function a human could perform was duplicated in miniature and made out of recycled soup tins and cloth cut-offs.

They didn’t stop at humans but included most animals, even aliens and robots. These wonderful toys made cocktails, flipped burgers, swept, dusted, played cards and shot craps. There were professionals represented, such as dentists, barbers, shoe shiners and hairdressers; I think you get the picture!

The condition of both the toy and the box is extremely important and the number of movements can dictate the price. Keep in mind that they are fragile and finicky. They may not have been made to last, however, their beauty and fascination are timeless.